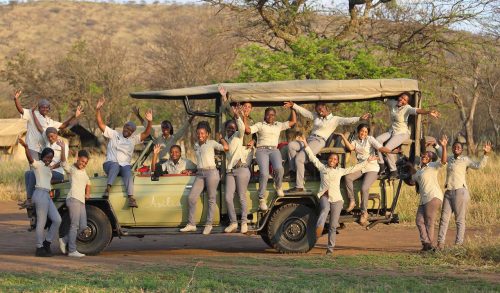 Serengeti, Tanzania, December 28, 2021 / TRAVELINDEX / Dunia Camp in the Serengeti, Tanzania, is an all-female-run safari camp run Tanzanian women. They have traded a traditional life, leaving their homes for months at a time to work in the dangerous bush, be independent, support their families, and provide an exceptional experience for guests.

Dunia, in Tanzania’s central Serengeti, is well placed for wildlife spotting. During the annual Great Migration, guests can watch giant herds of wildebeest moving through the area right from camp.

The safari comes right to Dunia, with the migrating wildebeest herds regularly passing the camp. Outside of the migration, there’s plenty more opportunity for wildlife spotting, too. During downtime, sink into a leather armchair with a cold drink in the open-sided dining tent and scan the sun-bleached plains for movement or get lost in a great book before retiring to your tent for an afternoon snooze.

Asilia was built by passionate people with deep roots in East Africa’s original family-run safari companies: Rekero Camp in 1986 and Oliver’s Camp in 1992. In 2004, they combined their experience, family spirit and commitment to East Africa and formed Asilia. Together, they sought to offer safari experiences paired with conservation efforts that bring meaningful change to the region. Today, we are a fast-growing, leading safari operator, employing nearly 1,000 people in 19 bespoke camps and lodges in Kenya, Tanzania and Zanzibar.