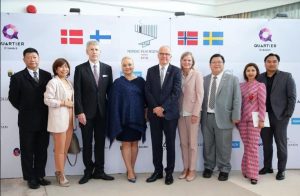 Bangkok (Thailand) – September 16, 2019 (travelindex.com) – The inaugural Nordic Film Festival 2019 will take place in Bangkok from 27 September to 29 September 2019 at Quartier CineArt, 4th Floor, EmQuartier to highlight the success of Nordic films and celebrate Nordic culture. This year the festival will shed light on sustainability and climate change, issues that are high on the agenda of all the Nordic countries. We will do so by making the logistics of the festival as environmentally friendly as possible. This modern film fest features eight movies selected to represent the quality of films from Nordic countries for Thai people to enjoy; across a variety of genres that show the arts & culture and way of life in the Nordic part of Northern Europe. Movies will be free for visitors to view and will be offered with English subtitles. Reservation can be made at Quartier CineArt, half an hour before each screening. Tickets are made available on a first-come-first-served basis.

The Nordic Film Festival 2019 is organized by the embassies of Denmark, Finland, Norway, and Sweden. The festival aims to increase interest for the Nordics as a creative and innovative region and help to amplify the demand for quality films that already exist in Thailand.

The film selection from each country will include the Swedish biographical drama “Becoming Astrid” which is about the early life of the Swedish author Astrid Lindgren. The Swedish drama “Monky” is a film that partly takes place in Thailand and tells the story of Frank and his secret friendship with a mysterious gibbon ape. The two Norwegian films “What will people say” and “The Liverpool Goalie” might seem different but are both based on the values of love and life-changing events. This year Finland brings to the big screen an experimental documentary “My Stuff” which is a telling comment on consumerism and the value of material objects in the digital age while contemplating what’s important in life. Internationally sold Finnish drama “One Last Deal,” tells a story of an elderly art dealer who hopes to make one last deal and prove his worth to his estranged family. Denmark’s “Darling” is a drama about a world-famous ballerina and a dramatic mid-career meltdown. “I am William” is a story about William who lives with his uncle Nils. The film is based on a book by Kim Fupz Aakeson.