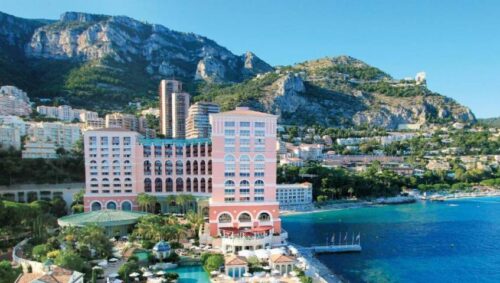 Monte-Carlo, Monaco, March 28, 2022 / TRAVELINDEX / The Principality of Monaco has committed to cutting its greenhouse gas emissions by 55% by 2030 from their 1990 levels and achieving full carbon neutrality by 2050. At the forefront of this challenge, Monte-Carlo Bay Hotel & Resort has been a leader in photovoltaic energy generation within the hospitality industry.

In partnership with Société monégasque de l’électricité et du gaz (SMEG – Monaco Power and Gas Company) Monte-Carlo Bay Hotel & Resort has installed a 1000sqm solar power plant composed of 788 tailored panels. Today it is the biggest rooftop photovoltaic energy system in Monaco. This project enables an energy saving of 160 MWh for a power generation of 154kWc, equivalent to almost all the outdoor lighting of the Hotel & Resort and equal to the annual consumption of around thirty dwellings.

To complement this renewable power generation, the Principality’s first Power Zone Station has been installed in the forecourt of Monte-Carlo Bay Hotel & Resort. This electric vehicle supercharger, which is usually located near highways, is one of the first in the world to be installed in the middle of a city. The Power Zone is powered directly by the hotel’s roof top solar panels and is 50 times faster than a conventional power outlet. EVs can be recharged in 20-30 minutes depending on the vehicle type. Drivers in Monaco can easily locate the Power Zone Station via on the Chargemap mobile app, further saving time and energy.

Along with supporting the Principality’s carbon reduction actions, Monte-Carlo Bay Hotel & Resort is also committed to reducing waste. The European Week for Waste Reduction (EWWR) has provided the Hotel & Resort with the opportunity to showcase several of its initiatives contributing to the circular economy.

During this week, the Hotel & Resort Chef Marcel Ravin participated in One day, One Chef, One Recipe organised by the Oceanographic Museum of Monaco. Chef Ravin created a 100% no-waste recipe for the eco-responsible coffee break with his “Clementine and Bread of the Next Day”.

In addition, Monte-Carlo Bay Hotel & Resort employees received awareness training on management and sorting of waste during the EWWR. This training was carried out by the Monegasque Sanitation Company and took place within the Hotel & Resort’s facilities. The EWWR was also a chance to give back to the community and Hotel & Resort staff assisted with the collection of toys for the benefit of the Soleil Royal Association.

Monte-Carlo Bay Hotel & Resort General Manager, Frederic Darnet is committed to the continuous improvement of his establishment’s sustainability performance, and encourages his team to always, “Listen, be available and responsive, give the desire to surpass oneself and the freedom to undertake, lead by example, innovate and surprise to aim ever higher!”

To further enhance Monte-Carlo Bay Hotel & Resort’s contribution to sustainable hospitality, GM Darnet has also supported additional certification of the Blue Bay Restaurant under Restaurant Engagé Certification. The Hotel & Resort’s starred-restaurant Blue Bay must now commit to: staff training regarding eco-responsibility; installation of sorting devices at workstations; reducing single-use bags and encouraging reuse; workshops to raise awareness of the environment, sustainable consumption and zero waste; among many other directives. The Blue Bay is among a number of starred-restaurant in Monaco to obtain Restaurant Engagé certification.