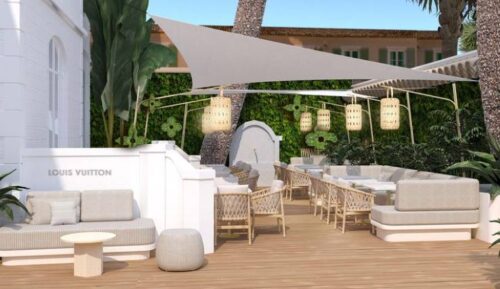 The dining spot, to be called Mory Sacko at Louis Vuitton is a 40-seat restaurant with outdoor dining located at the White 1921 hotel and headed by Mory Sacko, the French-West African chef behind the Michelin-starred MoSuke restaurant in Paris. His menu will showcase a blend of African, Japanese, and French contemporary culinary influences—reflecting Saint Tropez’s role as a destination for well-heeled travelers from around the world.

The Mory Sacko restaurant at Louis Vuitton, where the taste of design fuses with a contemporary, gourmet spirit. Sacko’s cuisine is inspired by African and Japanese flavors, reinventing dishes such as the Japanese bento box-style meal kits called ekiben. Dinner service offers everything from eggplant tacos to prime rib to a lighter tapas menu.