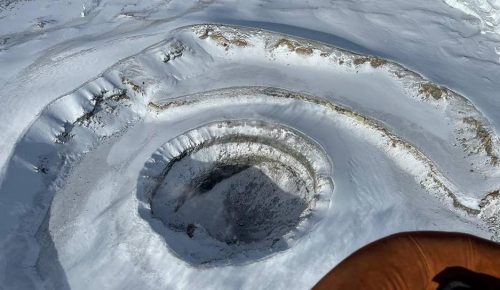 Kilimanjaro, Tanzania, January 28, 2022 / TRAVELINDEX / Captain Abeid Soka of Serengeti Balloon Safaris flies a balloon over Mount Kilimanjaro. “Ooh it was cold up there!” exclaimed Captain Abeid Soka, Chief Pilot and Director of Flight Operations of Serengeti Balloon Safaris. He had just been part of an exclusive group of the world’s top balloon pilots, who flew their balloons over the summit of Mount Kilimanjaro in December 2021. This incredible adventure was arranged by Josep Maria Llado, the founder of Ultramagic Balloons, a true adventurer at heart who has once before arranged a flight over Africa’s highest mountain.

“We took off from Usseri, very near the Kenya border on the eastern side of the mountain and ascended steeply through the clouds, within 55 minutes we were above the height of Mawenzi, Kilimanjaro’s second highest peak, before descending over the saddle and climbing again.

“By this point were breathing oxygen though nasal tubes, which we had been doing from 10,000ft, this is an important safety measure, particularly with a fast climb. Even the burners needed oxygen, injected through specifically designed ports.

“After a few more minutes, we were flying over the summit and the crater of Kibo, the highest point on the African continent. Carrying my Tanzanian flag as I looked down deep into the crater was an incredibly proud moment,” says Captain Soka. “It was amazingly clear up there, that image will never leave me.”

After flying over the summit, they had to climb again; downwind of a mountain peak, there can be sharp downdrafts, so they had to be prepared by climbing further.

There were eleven balloons in total, each with 2 pilots, who were selected from some of the very best balloon pilots from across the globe, chosen for their experience in mountain flying, which is unique for its weather and terrain conditions as well as challenging temperatures. Planning was meticulous and they waited 4 days for the perfect weather to make this achievement successful and safe. Each balloon carried 300kg of fuel and many landed with only half of that used.

“Knowing that I was the first and only pilot from Tanzania to be part of this incredible achievement, it was humbling,” exclaimed the beaming Abeid. “After clearing the summit and stabilizing the flight in the downward moving air currents, we flew low over Shira plateau, across the Londorrosi forest and out over the farmlands of West Kilimanjaro before selecting a clear space for a gentle landing.”

Captain Abeid is from the Chagga tribe that call Kilimanjaro home and the mountain of God, he grew up on the southern slopes of the mountain, so it was a particularly special occasion for him to be able to take part in this feat. He’s been flying balloons since 2010, when he went to Europe and America, sponsored by Serengeti Balloon Safaris, to attain his private and then commercial balloon pilot licences. He’s been Chief Pilot since 2015 and was made Tanzania’s first ballooning examiner by the Tanzania Civil Aviation Authority in 2021.

Other pilots included Josep Maria Llado and two of his daughters, the world no 1 pilot, from Germany, also Swiss, Belgian, American pilots and Ramses Vanneste and his father, Ramses has been a pilot for Serengeti Balloon Safaris, off and on for 10 years.

Abeid is now back in Serengeti, flying over the much smaller hills that we encounter there but he will never forget this extraordinary experience.